Let me tell you a tale of my last window cleaning job of 2018.

My friend Kaye is a strong, intelligent and beautiful bad to bone gal. We met seven years ago. She teaches aerial performance and yoga in her spacious, quirky, high-ceilinged apartment in the warehouse district of downtown Minneapolis, Minnesota.

The building is five stories tall, built in 1895, and used to be a furniture manufacturing facility. Her landlords bought it in the 1960s, converted it into residential units, and Kaye has rented her apartment for 10 years.

There are two types of ancient, creaky, rope-and-pulley, double-hung, cranky bastards in the apartment. They had not been cleaned in decades. Each one has a set of storms, and most have a screen. Some of the pulley systems are broken. She has six eight-foot-tall windows facing the street below. One of those has a rusted, crumbling fire escape under it, but they all have a 15-inch stone ledge on the exterior. The other three double-hung windows, in the back, are much bigger; about 6 feet wide and 10 feet tall, and those are fitted with four storm windows each. To pull those lower sashes closed, I had to hang on them.

This job took me five visits instead of the two I’d hoped for. I had planned on six hours, tops, but it took me twelve. By the third visit, I needed advice and re-enforcements. Craig Hendzel (super skilled in old windows) spent time messaging and skyping with me to try and solve some issues, and Rick Wren came to help me out on one occasion. I’m very grateful for their help.

Fellow windies, you all know how this goes. You have a beloved friend with the tragic combination of an incredible space and horrifying windows. You know you can help them, you want to help them, yet you know all too well that it’s gonna SUCK.

But love wins. And after grossly underestimating the time it will take, or knowing subconsciously but ignoring it, or hoping for miracles (“…I shall call upon my window-ninja-guardian angels…”) you say yes to your friend, because, man, she deserves clarity in her life.

And inevitably, despite all of your skills, experience, hopes and good intentions, it turns into a catastrophe.

I am not proud of this fact, but a few years ago I had a window-cleaning gig that literally made brought me to tears. Kaye’s windows were not on that level of suckage, but they definitely made my list of Top Ten Most Difficult Jobs.

I did it during the week of both Christmas and New Years. On the first night, it was 19 degrees Fahrenheit, (that’s about negative 35 degrees Celsius, for you those who have more sensible units of measurement, like the Metric system), and winds were high. When I went up to the rooftop to have a smoky treat and take photos of the downtown skyline, the air hurt my skin, but that’s Minnesota for you. I decided to do the storms and all the inside panes first, and to tackle the outsides on a warmer day.

Overall, most of the work was totally manageable. In total, I cleaned seven windows (32 panes, insides and out) that required every ounce of my care, strength and skills. I made use of steel wool, scrapers, my vintage Ettore squeegee, mop, Gunslinger, FallTech harness, climbing rope, and a six-foot ladder, besides my ninja-like balance and lion-like courage.

I started in the training studio. Because it ended up taking so long, I also cleaned all the mirrors in there for free.

I set up a storm washing station in the studio room, putting towels down and sitting on a stack of gymnastics crash pads. The storms are in two separate tracks, and to remove them, I had to raise them high enough to clear the metal “lip” in the frame that holds them in. They were heavy, but two of the three sets of storms came off just fine.

The middle window had several immediate and obvious issues. First, the screen had had a big slash through it since Kaye moved in. Second, it had an old iron steam radiator installed in front of it, which meant that the angle of space I needed to pull out the storms inward was compromised. Meaning that, third, I had to cram the bottom sash of the window upward as far as it could go in its painted wooden track in order to have enough room to manage the angle required. Consequently, fourth, I had to hang from the bottom sash (the pulley system was broken) with all of my weight to get it closed again.

The fifth and biggest problem was that the bottom storm window refused to come out. As I pushed it upward to clear the ridge of the frame, it kept hitting something metal on the top of the storm’s frame. 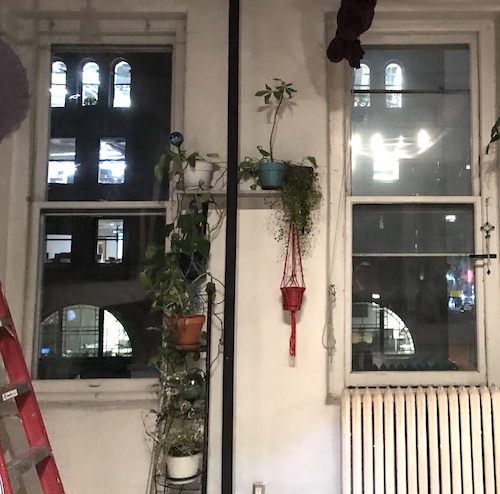 Trying to see what the storm was getting caught on was almost impossible. Even with my headlamp on, the sooty, greasy-bus-exhaust-covered panes were so dirty they prevented me from seeing what was actually happening. By cleaning the other two combination windows first, I could finally see their corresponding metal pieces, and could compare them to the Middle Child’s. I figured out that the metal clips in the top of the window frame, in bottom storm’s track, were bent out of their proper shape. After eventually consulting the online universe on day #3 (thanks, Craig,) I learned that these were “guides,” to keep each frame held firmly in their proper track.

But at first, in a fit of frustration and cluelessness, I asked Kaye if I could trash the ripped screen (which was stuck in place because of the storm that wouldn’t dislodge) and get a new one made later. I had a theory I may be able to get a better look at the problem from the outside if I removed that barrier. I was wrong. The “trashin’ screens” moment made a hilarious video, but it didn’t actually help. At one point I was considering some pretty drastic measures, like removing part of the molding on the wooden window frame, in order to remove the sashes, in order to get at the metal guides. Or cutting through the paint that held the upper sash stationary, in order to access the guides. Each option gave me nightmares.

I had at least two nightmares during that week, and a constant feeling of anxiety. This was some serious stuff, in my world, and stressed me even more than the holiday hoopla did. Even more so because Kaye is a friend, and I didn’t want to let her down.

In the end, none of the scary options were necessary. Maybe the Middle Child sensed my trauma, or maybe a difference in temperature changed things, but the next time that I tried to remove the storm, after a bit of a struggle, it came right out.

It was one of a half-dozen moments during this job that made me feel like a freakin’ rock star; a feeling that crumbled to dust as soon as I attempted to put that same lower storm window, after cleaning it, back into its place. I broke the goddamned storm, because I got too heady, had it in the wrong stupid track, and forced it.

For the record, I did not cry, but I kinda wanted to.

The total damage I did to the screen and the storm cost me $75 dollars to fix, not including the damage done to both my sanity and my ego. But Kaye’s reaction to her clean windows made it worth every moment of madness. In my experience with window cleaning, that is usually how it goes.

Seeking clarity, and making window cleaning a little more beautiful, interesting and entertaining: this is Carrie the Window Ninja, signing off.