By Carrie, The Window Ninja 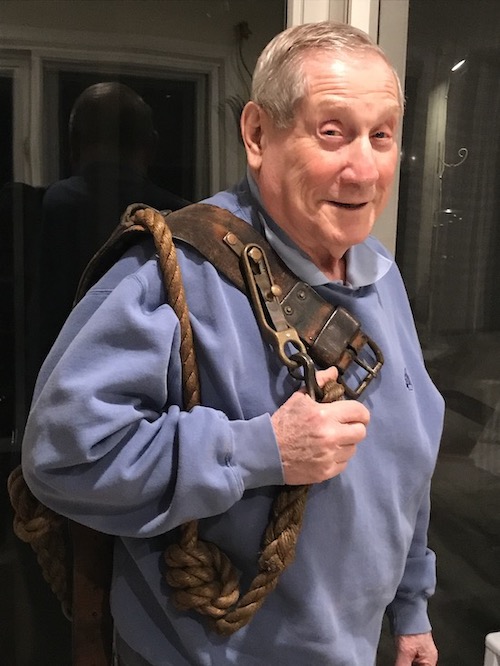 Jerry’s long career consisted of about 90% commercial and storefront jobs. The biggest cities, he said, had a lot of Jewish window cleaners, many of whom - as we read in Part 1 - came here from Poland. In the 1950s, he was in his twenties. "In New York and Chicago a 75-story building took up a whole city block, and they would clean the whole thing once a month … so one building was an entire business."

Union window cleaners at the time were earning about 40 cents per hour. "Downtown Minneapolis," Jerry said, "used to be all union."

He preferred piece-work, he said, "… which was paid by the pane. So speed was everything. In 1953, I could make $300 per day doing piece-work. That was big money back then."

Jerry, who started cleaning glass for his dad at thirteen, liked the work because it was outdoors and he could move fast. I asked how fast.

"Two minutes for the inside and outside of one double-hung window," he told me.

That is freakin’ fast. That is 8 panes of glass. Fifteen seconds per pane. I really need to step up my speed game.

Jerry started "breaking in" new employees for belt work by having them do the inside as he did the outsides, mirroring him, until they said they wanted to try the belt. 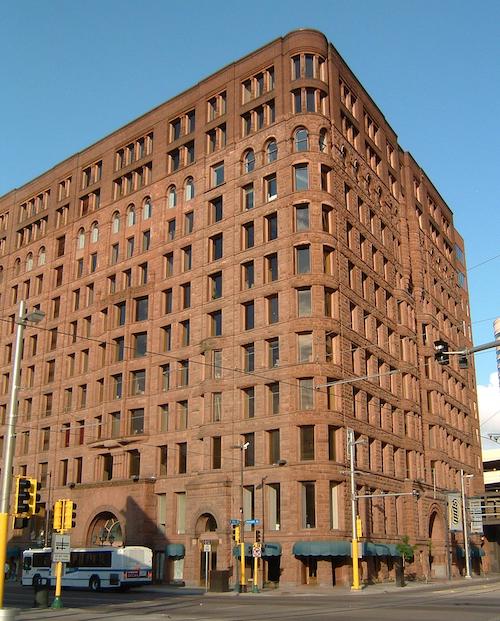 We talked about different historic buildings in downtown Minneapolis, and he listed all of the most famous names in old Minneapolis industry among his former clients. "Pillsbury, General Mills, Honeywell, Wyman, Grain Exchange, Lumber Exchange, Flour Exchange, I did all of those. Most of it was belt work." 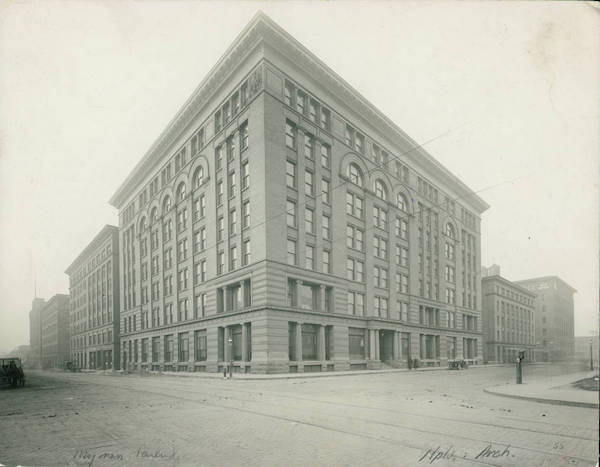 As belt work (wearing a wide leather belt that would latch on to hooks on either side of the window) became illegal, Expert Window Cleaning company acquired their own swing stages, as well as Bosun’s chairs (outlawed as well, now, in our state), and Jerry explained how they’d suspend from iron planks drilled through with holes for ropes, weighed down with sand bags, or they used hooks over the wall’s edge. Eventually they progressed to controlled descent-only apparatuses (CDAs).

Minnesota is famous for its cold weather. The coldest job Jerry had was cleaning glass for the Lutheran Brotherhood Building (8 stories, built in 1956) in Minneapolis. It had just been built. "It was negative 32 that day," he said. He used 100% denatured alcohol.

The Moline factory, a steel and machinery company, stood in Minneapolis from 1902 to 1973. Jerry explained that in many factories like it, he would need to use acid to get the rust and chemical burns out of the glass. The company appreciated his skill because of the cost it saved them in replacing damaged windows. "At Honeywell, too, you know… they made bombs there during the Vietnam War, we used hydrochloric or hydrofluoric acid in there to get the metals out of the glass."

I told him about my friend Kaye’s place in the Minneapolis warehouse district. When I cleaned her windows I used steel wool several times over on some of her glass, and it still looked awful. Jerry asked me what her address was. I told him, and he said, "That’s because her place used to be a factory, so that is a chemical burn, not hard water. To take that out, you have to use acid."

As I unpacked my basket to show him what I use for work, we talked about the other products and tools he used in his time. They didn’t use dish soap, like I do in residential cleaning. They used trisodium phosphate, bought in barrels, and Soilex, a water softener with high pH that emulsified and broke down greases and oils, using just one pinch to a bucket of water.

For hard water, they used steel wool. They detailed with shammies. They also used Rock Island sponges, and some brushes. Jerry says he was the first cleaner in the state to have a "wand" or applicator, which he brought home from New York.

They used Encore squeegees, which I had never heard of, and would tape up the handles for a better grip. Besides the other height equipment I mentioned, they also had 24 and 40 foot extension ladders.

As we talked tools, he seemed to enjoy seeing what I use. "That’s terrific, what you got there!" "It’s much better than what we used." "With my belt right here, we didn’t have all of those gizmos." Jerry said he would put his squeegee in his back pocket (and never dropped any tools … I asked), put his shammy in his front pocket, hung the bucket from his belt and kept the wand or brush in the bucket.

Of course we discussed everyones’ favorite subject, accidents. "You know the Fineline Music Café … on 5th and Hennepin?" Jerry asks. I know it well. "I fell five stories there. Backwards. I was working on a belt, and I leaned back and the whole window came out, with the wood and everything. I hit an awning on the way down, the awning and me hit the sidewalk, and glass was all over me. And all I had was a little tiny cut on my nose, and little bit of blood dripped onto my white tee shirt. And when I came home that night, my wife said to me, ‘you been in another fight?’" He laughs. "’Cause I used to be a fighter, see."

To quote from the 2015 documentary, High Rise Window Washers of Manhattan:

"Years ago, it was all Irish, Polish, some Italians … we didn’t really think about safety, back then. And a lotta window cleaners were better drunk than they were straight!"

When I showed him the squeeze bottle I keep in a holder on my belt, he said, "What do you do with that, drink out of it?" I laughed and said I carry soapy water around in it, because it saves me trips to the bucket to re-wet my wand.

"OSHA was just coming in as I was getting out," Jerry said. But he had plenty of stories about shenanigans before things got more strict, in regards to safety. Denatured alcohol, for example, had to be used for cleaning in freezing weather. It’s ethanol that has additives to discourage recreational consumption. But real drunks are hard to discourage.

"These guys would drink while they worked…" he said.

"They’d just have a flask, or something?" I asked.

"No! They’d drink straight denatured alcohol, right outta the can! And they’d drink a lotta wine, ‘cause it was cheap, see? But then I couldn’t grow, with those guys. Because they would get me in trouble."

"We had a guy, we used to call him Blackjack, and he was working on one side of the building, I was working on the other side. He fell about 3 or 4 stories. Hit something on the way down that broke his fall. I took him across the street and bought him some drinks, and he went home. The next day, he woke up and his back was broken. The shock kept him going."

Mister Jerry’s lived through a lot, and I was amazed at how many stories came up, for him, and in such detail. It even seemed to take him by surprise. "I haven’t thought about this stuff in years!" he laughed. He really seemed to have fun with it, just like I promised him it would be.

For a couple more of Jerry’s recollections, and a conversation with Bev, his wife of 62 years, please read my related blog posts on Facebook (The Window Ninja) and Wordpress (Elizabeth Gilmer).