By Carrie, The Window Ninja

Part One: Meeting Jerry, and learning his early history. 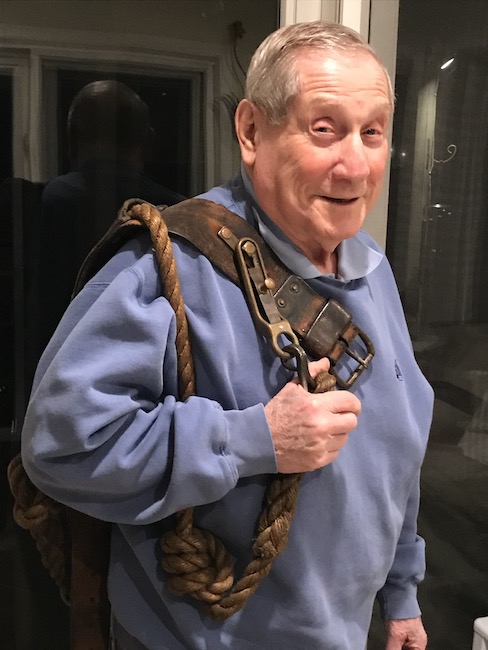 When I first went to meet him, Jerry claimed he had nothing of interest to talk about. He is a humble man, but – looking at his house – clearly, he has done well. At 84 years old, he is stocky and only slightly stooped from age. He says he was a fighter. I don’t know if that means he was a boxer, or that he just used to get into a lot of fights, but he looks the part.

At our second meeting he relaxed and started to talk more openly, I showed him my collection of tools, and asked if he could show me his squeegee technique on the sliding glass door behind him.

He laughed. “No, I’m not gonna do that. I can barely get up outta this chair!”

But a little bit later, when we were debating the best way to fan a window, his eyes started to twinkle, and next thing you know, he was getting up, holding my squeegee out in front of him, showing his techniques and explaining the tricks to minimize drips. Then he showed me his tool belt, which was passed down to him from his dad. It’s the kind they used to hook onto the outsides of skyscraper windows, back in the day. He estimated that it’s a hundred years old. Eventually, some great stories started to emerge.

“I was the only Jew cleaning windows in Minneapolis, back then. And I was gutsy. Sometimes there were no hooks to clip onto. I used to stand on a ledge, six inches wide, with no belt, no nothing, just stand on the ledge … I’d stand sideways, hold onto the frame with one hand, mop the window with my sponge, put the sponge in my mouth, and take my squeegee outta my back pocket. The first time I ledged a window like that, there was a guy that saw me do it, and he threw up. We became very good friends after that.”

In the very beginning, Jerry seemed to think I was just looking for advice. I worried he was doubtful that I was even legit. Within the first few minutes, I feared he was trying to shut me down, because I got a reaction I am used to getting from people of his generation:

“You’re a pretty gal,” he said. “You seem real smart, why don’t you just find a nice guy with a good job and …”

“Jerry, you don’t know this yet, but I’m telling you, you don’t wanna go there. I’m not that girl. But trust me, this will be fun.”

Once he had a clearer idea about my vision, we arranged a second meeting where I would bring my gear over, record our conversation and ask specific questions about his life and career.

At one point, I asked if he ever felt looked down upon for being a window cleaner. I’m sure we have all felt this way, at one time or another. He said no.

“I was in the service. I’m a Korean War vet. Once I got home, I knew I didn’t wanna go to school. When I started my own company, I liked being my own boss. Some people look down on you like you’re a janitor or something. But it’s a good living. I never felt like I was a disappointment or anything. I come from window cleaning.”

Jerry started squeegeeing at thirteen, working Saturdays with his dad, Adolf, who had an interesting story of his own.

Adolf arrived in the states, just after the first decade of last century, through Ellis Island, New York. Back then, a lot of Jewish men from Poland were already trained as window cleaners. There were also plenty of men with Irish backgrounds who did it in New York at that time, as well. But Adolf first tried his luck as a junk dealer. By 1917, he learned from some other immigrant friends that with all the skyscrapers in New York City, there was much more money in window cleaning. He joined them. Eventually, he bought a car, and one enterprising buddy asked him if he’d drive out to California to check out the window cleaning business on the West Coast. He stopped in Minneapolis. In June.

Jerry recalled, “The weather was great, in June. He stayed …”

“…until January?” I laughed. ‘Cause January in Minneapolis is laughably horrible.

“No, actually, he never left! He picked up some window cleaning work, met my mom while cleaning at a sewing factory where she worked, and that was it.”

Jerry was born in Minneapolis. In the mid-1950s, when he was in his mid-twenties, after getting home from Korea, Jerry got into professional window cleaning right away. He worked on crews in New York first, then Chicago, and finally landed back home in Minnesota, where he eventually ran the company started by his dad, Adolf: Expert Window Cleaning.

Be sure to read the next issue of AWC magazine for Part 2 of Jerry’s story:
Slaying it in Minneapolis; talking historic buildings, shop, methods, products and accidents!
Continue Reading