My glass cleaning jobs in Thailand fell into my lap because of Thai friends - friends with money. I’m blessed with all kinds of Thai friends because of my work and travels there over the past 18 years, and I can tell you that average Thai people don’t give a hoot about clean windows. They find it both unbelievable and ridiculous that I have gone from being a teacher in their country to being a window cleaner in mine. Windows, like any other part of a typical Thai house, are mostly functional. They are either for ventilation, or for covering, depending on the time of day and how hot it is. The idea of nice views from home is rarely considered. You go outside for nice views.

My main job was in the small river town of Phetchaburi, Thailand, and the numbers were as follows:

My Thai friend is a politician. He’s likely the only Thai I know who has never known poverty. He’d just had a compound built for his family of four, and for his staff.

Last fall, he sent me photos of the main house, as he was finishing it, and a text asking if I could clean the windows during my upcoming winter visit to Phetchaburi.

I looked through the photos and texted back, “You have way too much money. That is not a house. That is a hotel.” 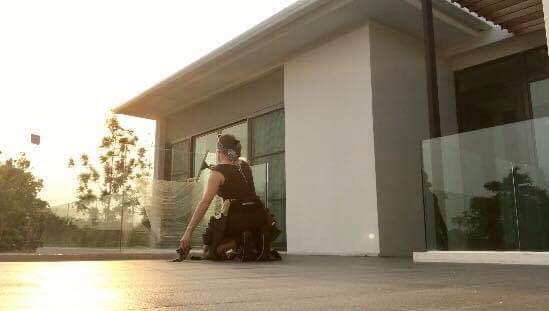 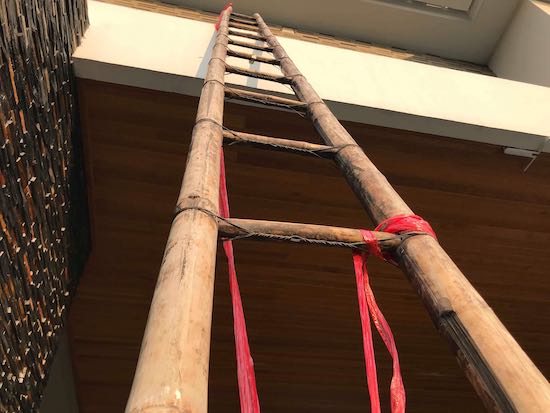 There was one window I could not reach with the 20-foot creaky bamboo ladder they provided, and after considering building a scaffold, in the end, we decided to skip it. The ladder was also the wrong height to do the exteriors of the railing panels, so I did those by reaching over.

In the main house, all the different wings of the building are connected by outdoor, second-floor walkways, which all have glass railings. He said I should clean whatever needs it most, but to concentrate on the main house and the conference rooms. That work took me two ten-hour days. Later, he added three glass overhangs, and one glass-roofed pavilion, which took another six hours, and those surfaces were the dirtiest and the most unpleasant part of the work.

Rain-Off was a product, my friend explained, that amazed him when he took a winter road trip from Florida to Madison, Wisconsin, in his youth, to experience snow for the first time. His crappy van did not have functional windshield wipers, so he said he applied Rain-Off to the glass and it worked miraculously to repel the sleet and snow. It was a nice story. But now he wanted me to apply it to the overhangs, and I already knew I would hate it. 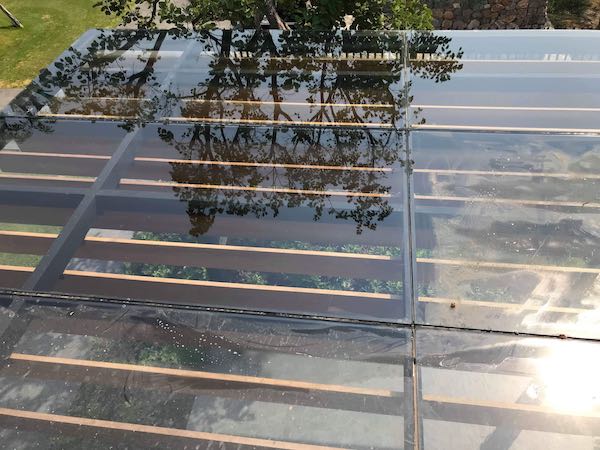 Trying to conceal my aversion to working with any type of wax, ever, I said, “But a windshield is a more vertical surface than a rooftop, and you understand that it will not repel water in the same way, right?” I also explained that any product with oil or wax in it would leave streaks, so he could have pretty glass, or water-repellant glass, but probably not both. He still wanted me to try it, at least on that first overhang.

The results were – predictably - disappointing. Streaks like crazy. It killed me to look at it. The worst part was that it tripled the time it took to finish cleaning the glass. But I walked away from it to work on cleaning the rest of the overhangs.

Little did I know, a happy accident would happen that would end up showing my friend that the product was not going to do what he had hoped. Up above that glass overhang was a flat concrete roof, connected to another glass overhang. The water bucket I brought up to the third floor was so heavy that I emptied some of it into a gutter, not realizing that the gutter had come apart about ten feet to my left. Even though I ran to throw my towel over the puddle, it dripped down onto the Rain-Off coated rooftop below. Bummer, but also perfect, because I waited an hour to let the drips drop and dry, and then asked my friend to view the spotty results that the mostly-clean water had left. I begged him not to waste my time, or his money, on Rain-Off. “Okay,” he said, “You’re right. Rain-Off sucks.”

The best thing about this job was the fact that I went back to record my window-cleaning dance-video at their house, and my friend’s two kids helped me to film it. It turned into a little party. At the end of the evening, my friend, his kids, his wife and their assistant all wanted to learn how to squeegee a window, so I demonstrated and we all took turns, and laughed and critiqued each other. They made me promise that I would be back to clean their windows next winter, and I was aware that it just does not get much better than this, as a traveler, or as a window cleaner.