Equipment, such as tools, squeegees, or buckets, is secured by a tool lanyard or similar method to prevent it from falling;

Tool lanyards come in different sizes and from varying manufactures. All of the tools that we in the window cleaning industry would be like missles falling from the sky if they were to leave the hands of the worker. When it comes to safety there is the finable kind as with OSHA and there are precautions that must be taken into consideration with regards liability. With tool lanyards both come into play. The obvious is a person innocently walking a sidewalk and takes a t-bar to the noggin. However, even the workers on the ropes are at risk as many times when using a rope descent system the workers come down the building staggered so the potential exists for a falling tool to strike another workers as well.

The squeegee and mop can be secured using products such as pictured below.

However, there are two tools that are often neglected when it comes to tethering. The first is the bucket. Many window cleaners modify their buckets in some way to try and gain more strength in the handle area but regardless of the modification if the bucket handle breaks the bucket is going to the ground and the possibility exists to hit a worker or pedestrian. The Bucket Lanyard pictured below supports the bucket from beneath and doesn’t rely on the handle of the bucket to support it.

The second tool that is often overlooked is a person’s cell phone. However, the phone falling on someone from height can be just as serious as anything else. Luckily, they do make a phone-lanyard so this doesn’t happen. 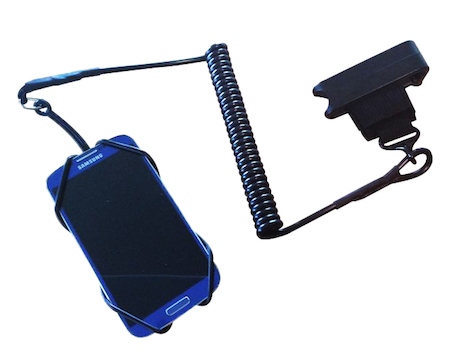